Allen Downey is a professor of Computer Science at Olin College and the author of a series of open-source textbooks related to software and data science, including Think Python, Think Bayes, and Think DSP, which are also published by O'Reilly Media. His blog, Probably Overthinking It, features articles on Bayesian probability and statistics. He holds a Ph.D. in computer science from U.C. Berkeley, and M.S. and B.S. degrees from MIT. He lives near Boston, MA.

In Search of the Fourth Wave 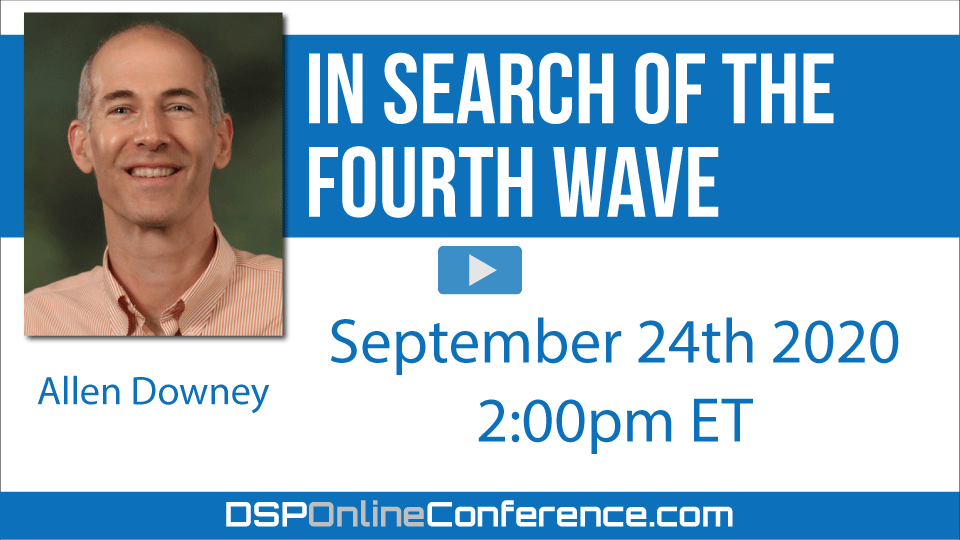 When I was working on Think DSP, I encountered a small mystery.  As you might know:

This pattern suggests that there is a fourth simple waveform that contains all integer multiples (like a sawtooth) and drops off like 1/f² (like a triangle wave).  Do you know what it is?

In this talk, I'll suggest three ways we can solve this mystery and show how to compute each of them using Python, NumPy, and SciPy.  This talk is appropriate for beginners in both DSP and Python.

How about all even harmonics? :)

Yes true, unless you said that DC is always the even series fundamental...?
Perhaps you could somehow harness the DC Fourier analysis partial and freq shift it up to hear the even wave or something ? ?
Thanks for the great presentation btw, very interesting.

Nice explanation covering most of the DSP topics

Hello,
Is it possible to have the slides of this presentation? Thanks.

The Jupyter notebook is the slides. I used RISE to display the notebook in slide format. You can run the notebook here: https://tinyurl.com/mysterywave

this is awesome one

Very cool talk! I can't help but point out though, the complex exponential at 23:30 is missing the imaginary constant i or j!

Yes, I noticed that during the playback of the talk. It's fixed now in the slides. Thanks for letting me know!

The sawtooth & square wave spectra fall off as 1/f since the wave has discontinuities in the series itself (in the continuous representation); the spectrum of the triangle wave drops as 1/f^2 since the discontinuities are in the first derivative.

Very enjoyable talk Allen, much appreciated, will check out your blog and your ThinkDSP book.

Why did you pick the parabola-looking wave, instead of the sine-ish looking wave as the representative shape?

No special reason other than the shape was recognizable as a parabola, which led me to Method 3. And then the integration property tells us that the parabola is the integral of the sawtooth.

personally, i'm "partial" to the leaning-sine :)

I think we picked up a delayed copy of the wave from my speakers to my mike, so there's some interference.