Ric is a contributing author to two chapters of the book “Streamlining Digital Signal Processing: A Tricks of the Trade Guidebook, Second Edition” edited by Richard G. Lyons, published By Wiley & IEEE Press (2012). 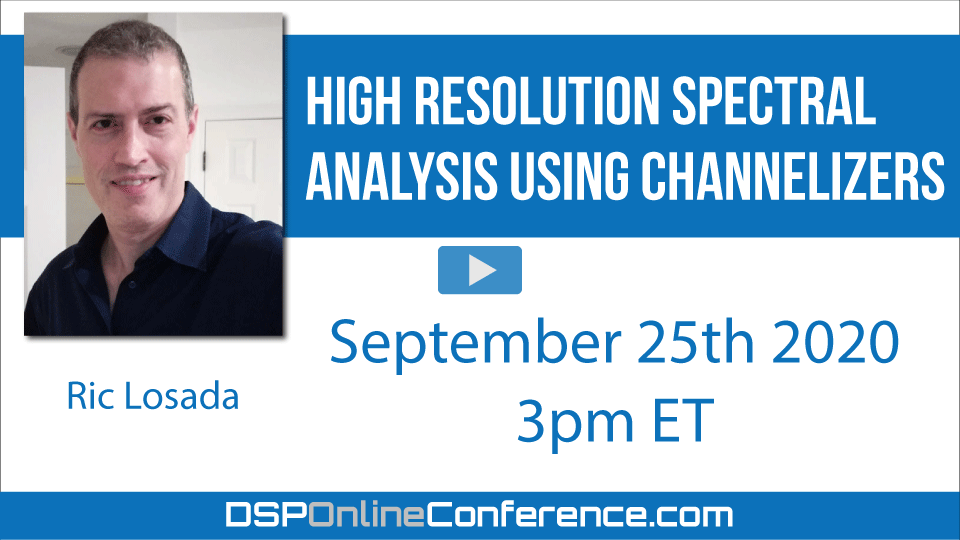 Modern spectral estimation is most often done using FFTs. Spectral windows are used to tradeoff spectral leakage for resolution (the ability to distinguish between spectral lines that are close to each other). Rectangular, flat-top, Hann, Kaiser windows (among others) are all commonly used, and each have their strengths and weaknesses. The window + FFT approach is called a (modified) periodograms and, when used in conjunction with overlapping and averaging, Welch’s method.

We discuss here an alternative to this approach using efficient polyphase-FFT filter banks (a.k.a. channelizers). Channelizers find wide application in wireless communications systems. The analysis filter bank can also be used for high resolution spectral analysis. The tradeoff between resolution and spectral leakage is much less of an issue with the channelizer approach. You’ll also get more stable and accurate peaks and a more consistent noise floor. Channelizers are the modern/digital equivalent of sweeping a narrow bandpass filter across the spectrum and computing the average power of its output. However, there is no sweeping required and no spectral window either.

UpvotesNewestOldest
Score: 0 | 2 years ago | no reply

If the total number of samples I can work with is fixed, say to 8192 samples is the rectangular window approach still the one with the narrowest spectral resolution or an 8 tap channelizer ( 8 x 1024) will have a better resolution?

It depends on whether you are doing any averaging.
Also are you streaming chunks of 8192 at a time or is it a one-time 8192 samples and that's it scenario.
Overall, the channelizer is best for streaming when you are constrained in the size of each segment because of averaging, changing statistics and/or FFT size.

Thank you all for listening!
Here's a link to one of the MATLAB examples. Very similar to what I showed:
hyperlink

Very enjoyable Ric, like how you re-emphasized some of the topics from fred harris' multirate talk and showed some real examples.